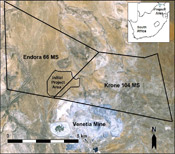 The Krone-Endora at Venetia project was acquired from De Beers and is co-located directly adjacent to the De Beers Venetia Diamond Mine in the Limpopo province of the Republic of South Africa, approximately 500 km north-northeast of Johannesburg. The Venetia mine is the 3rd largest diamond mine in the world, and South Africa's largest producer of diamonds, accounting for over 50% of South Africa's annual output. A high percentage of the diamonds produced at Venetia are reported as being gem quality, with the rest sold for industrial uses. Given the Krone-Endora projects location directly adjacent to the established Venetia mine, many operational benefits are obvious.  In addition to this, both the previous exploration and the NI43-101 report concluded that the deposit on Krone-Endora at Venetia was not only an alluvial deposit, but also a rare eluvial deposit indicating a direct shift of material from the higher grounds of the Venetia Kimberlite clusters onto the lower surrounding areas of Krone-Endora. Given the eluvial nature of the deposit and its location directly adjacent to the source, the diamondiferous gravels at Krone-Endora at Venetia appear much more consistent in nature with initial grades from drilling and bulk testing much higher than that of typical alluvial type deposits.

As part of the acquisition process an independent NI 43-101 technical report for the Krone-Endora at Venetia project was released by the Company in July of 2009 and updated in April of 2015. The updated report provided an inferred resource estimate of 57,981,000 tonnes of diamond-bearing gravels with 1,387,000 carats of diamonds for the areas of the project on which work has been done to date. In conjunction with a planned move to immediate trial-mining exercises on these areas, the Company will concurrently perform additional drilling to determine the full potential of the project to assist in final production decisions. The deposit is also noted to be near surface, and diamond bearing from surface to bedrock, and with a total depth of 15 meters from surface to bedrock, will allow for a simple, low-cost strip mining operation to be employed.